Let’s imagine that we are in Nottingham and the year is 1858. Queen Victoria has been on the throne for over twenty years and the tragedy of the Irish Potato Famine was thirteen years ago. The Australian Gold Rush is in full swing and people are seeking their fortune in a place called Bendigo. The Houses of Parliament in London have ordered a large bell to be installed. It will be named Big Ben after Ben Caunt, another famous Nottingham prize-fighter.

There is some optimism for the people of Nottingham. Bendigo is now a household name and a sporting hero. Nottingham is a town on the up. The Luddites and the Chartist riots are a thing of the past. The town is now building better housing for its people. The railway had arrived 20 years ago and this has allowed deep coal mining to begin. There is plenty of work in the railways, collieries, and the lace and garment factories. Photography has arrived and is changing the way news is shared.

Bendigo has now been retired for a few years. He is sat in The Forest Tavern on Mansfield Road, the pub where he used to train before his fights. He is a regular at the pub and has developed a liking for beer. This has caused him a few problems. His brother Thomas is involved at the pub and Bendigo has trusted him to look after his money. His brother gives him an allowance each week. Bendigo retired as the undefeated Champion of All England. His cups and belts are on permanent display in the pub.

There is funeral taking place and people involved are congregating in the Forest Tavern. The funeral is of a man named Lewis Goldberg. He was the Jewish rabbi and his burial is taking place in the small Jewish burial ground at the back of the pub. His family later emigrated to Ballarat in Australia, not far from Bendigo.

This imaginary scenario is quite possible. We have found evidence to confirm that John Ellis, the proprietor of The Forest Tavern did display Bendigo’s cups and belts there. Thomas Thompson is also the only member of Bendigo’s family, known to have had children. Not only that, the direct descendants of Lewis Goldberg are still living in the area. We have met them and been able to visit the cemetery.

What happened to John Ellis and his family?

What happened to the family of Thomas Thompson?

What happened to Bendigo’s cups and belts?

We would love to know.

Whilst The Forest Tavern no longer operates as a public house, the owners of the building have committed to preserving the original front of the building. We are also hoping to erect a plaque so that the building is identified.

Here is the more detailed history of the Forest Tavern and the Jewish Burial Ground.

Mansfield Road heads north from Nottingham and dates from at least 1674. It was established as a turnpike by Act of Parliament in 1787 but the roadside remained undeveloped until the early 1800s. North Sherwood Street (at the rear of The Forest Tavern) was a field road. The Enclosure Act of 1845 brought the common farmland (at the rear of The Forest Tavern) into developable hands. The scarcity of available land at this time meant building three stories high and up to the edge of the street. The rear part of the property fronts onto North Sherwood Street. This part of the building was originally a separate workshop unit, with carriage doors at ground floor level.

Immediately next to the rear workshop is a small Jewish burial ground that was created in 1823 on what was formerly waste ground. The burial ground is approximately 12 sq/m and contains seventeen graves surrounded by a stone wall. Although the cemetery closed in 1869 it remains unaltered and is included on the Historic England Register of Parks and Gardens at Grade II.

The Jewish community in Nottingham had started to re-establish itself, bearing in mind they had been expelled from England by Edward l in the 13th Century. An inscription above the entrance reads: This burial ground was given to the community by the Corporation of Nottingham 5586. The ground was closed 5629.

There are between 20 and thirty graves dating between 1824 and 1866. The burial in 1824 was of a man named Soloman Barnett. He died at the Nottingham Workhouse after an epileptic fit. Bendigo would also spent time in the workhouse two years later.

Rabbi Lewis Goldberg was 61 years of age when he died in tragic but unusual circumstances. He had not long moved into a house on Drury Hill, the famous and very steep lane in Nottingham. There is a Jewish tradition of placing a symbolic ‘mezuzah’ above the doors of the home. Lewis Goldberg was stood at the top of the stairs and nailing the mezuzah into the door frame when he lost his footing and fell down the stairs. Even more tragically, the claw of his hammer landed on him and pierced his skull, causing his death.

Thanks to the Snapper family, we also know the history of Lewis Goldberg. He was their great-great-great-grandfather and the family are still in Nottingham.

Lewis Goldberg was born in Prussia in 1797. He moved to the UK with his wife Hannah Brasch. They had a total of eight children including Elizabeth (great-great-grandmother) and were known to be living in Nottingham by 1851. Elizabeth Goldberg married a Lewis Karmel in Nottingham and they had twelve children. Some of Elizabeth’s sisters moved to Liverpool after marriage.

Following Lewis Goldberg’s death, Hannah and her children were impoverished, and in the early 1870s, members of both the Karmel family and the Goldberg family emigrated to Ballarat in Australia (a centre of the Australian gold rush at the time). Only Lewis and Elizabeth Karmel remained in Nottingham. Their daughter Minnie went on to marry David Snapper, and through two further generations this family name has survived.

This moment in time helps to connect our fascinating and shared history. 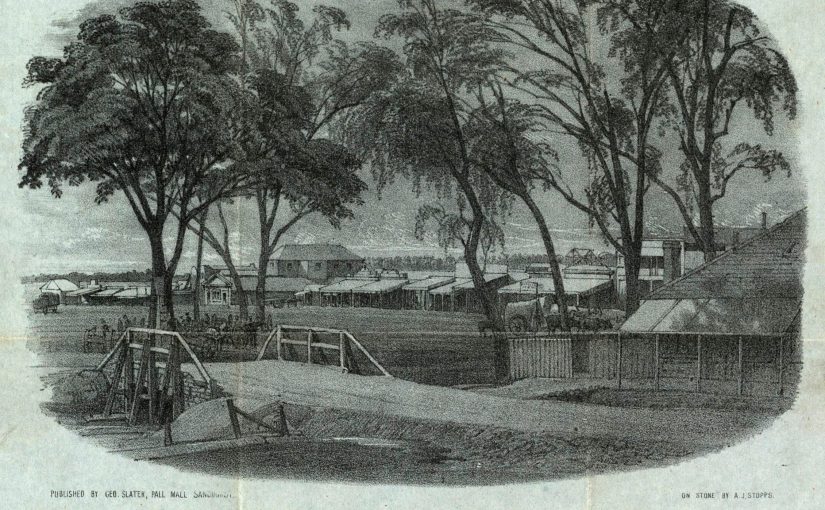 Our research has revealed some fascinating 19th Century history. We have discovered a family with links to the cities of Nottingham, England and Bendigo, Australia.

Thanks to the archives at the University of Nottingham (Manuscripts and Special Collections) we have had access to papers belonging to John Lawson (1878-1969). John trained as a pharmaceutical chemist and was asked by Jesse Boot to join Boots the Chemists as a manager. Lawson lived in West Bridgford Nottingham. On his death, some of his personal documents were given to the Boots Company and these were handed to the University of Nottingham. Of particular interest are letters between two brothers, William and Thomas Lawson. They provide an insight into the early settlers in Australia.

William fled England in 1851 after some financial problems. He left his wife and child behind. William travelled to New Zealand and then to Australia, where he was part of the Australian Gold Rush. William did not appear to make his fortune and he never returned to England. He did write to his brother occasionally, promising to return (although often ask for money). He appears to have married again and had children. His son (from his marriage in England) even travelled to Australia to find his father. It is not clear whether he did.

He describes his arrival at Port Lyttleton, and his journey on foot to Christchurch. He initially worked in farming, then as a butcher in Wellington. He intends to make his fortune and then return to England. He describes the abundance of wild life and food. He describes the anniversary celebrations of the first settlers with horse races, Maoris running races, catching pigs, wrestling and cricket.

He thanks his brother for looking after his wife and having to leave England to escape his debts. He mentions the lack of women in New Zealand and wants his wife to come out and join him.

Thomas asks William why he felt he had to leave England and questions if he is any better off in New Zealand. He hopes he will make money and pay off his creditors. He urges him to wait until he has made some money in Melbourne before bringing his wife out there. He explains the financial arrangements for his wife, who has no desire to join him in Australia.

William describes how he has lived among murderers and states that ‘all the villains in the world I think are here’. He complains that he is miserable because he is lonely, even though he has money.  He explains that he did not send any money home or write as he assumed family in England no longer thought of him and so he had tried to forget them. He apologises for this. He states that he intends to stay in Australia with the wealth to be made from gold. He ends by asking if anything ‘disrespectful’ relating to his wife ‘has come under your notice’.

Letter from William to Thomas Lawson dated 22 May 1857 (from 231 Elizabeth St, Melbourne, Australia).

He justifies why he left England and discusses amount of money he could earn in Australia on the gold fields. He wishes Thomas would speak to his wife and promises to send Brother Tarbotton the money he owes him. He hopes to see his mother again and complains of the lack of charity shown to his wife. There is mention that she was forced into the workhouse. He hopes relations between the brothers will improve.

In July 1857 William sent Thomas a number of prints showing buildings and locations in Australia that he had visited.

He reports that they have just sunk a large shaft to search for gold but found nothing. He mentions that he worked at Pall Mall in Sandhurst four years earlier.

1 Image of Houses of Parliament, Melbourne

William reports that all the money he made in Victoria has been lost in mining transactions and he is now working at his trade in Melbourne. He asks for money to help him come home in three years.

Thanks him for letter and praises ‘my Ellen’ and remarks on his children. Promises to send information on them in his next letter. Asks for loan of £50 so he can get home otherwise he will stay in Australia.

Sends details of his marriage to ‘Ellen’ and his 6 children, 3 of whom died in infancy.

Remarks on his work in Victoria and that ‘all esteem him in Victoria. He insists he has never disgraced his name since leaving home 22 years ago.

Reports that after arrival in Freemantle he discovered there was no work as a mechanic, despite what he had been told. He states that he has taken work carrying coals for P&O Steam Navigation Company. He wishes he had not brought his family out and considers there is little chance of him getting to Melbourne to see his father. States that he has been imprisoned for six months for being on board a steam ship after sunset without a certificate proving he was not a convict. He claims he was only on the ship asking if it could give him passage to Melbourne. He describes working as a navvy creating fish-ponds.

Thank-you for reading. We hope you found this of interest. Follow the links or contact us for for more information.