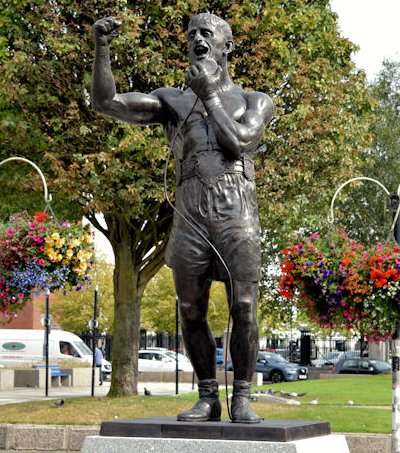 When our campaign started in 2016, former world featherweight champion Barry McGuigan wished us luck. He also mentioned a similar campaign, for a statue to Rinty Monaghan in Belfast.

In 2015, a statue of the former world champion boxer, John ‘Rinty’ Monaghan was unveiled close to his birthplace in Belfast. Monaghan was the first boxer from the city to win a world title, becoming flyweight champion in 1948.

We have recently discovered that, long before our campaign started, McGuigan had even celebrated the contribution of Bendigo to the sport.

In September 1991, he spoke about Bendigo in a BBC Radio 4 programme. The programme was mentioned in The Reading Evening Post as a Radio Highlight.

Similarities In The Two Campaigns

Having looked at the news reports about the Rinty Monaghan statue, we have identified a number of similarities to the campaign here in Nottingham. The two cities even have a similar population. Belfast 280,000 and Nottingham weighing in at 330,000.

This was the description of Monaghan by the sculptor Alan Beattie Herriot. The same has been said of Bendigo.

Monaghan was the first boxer from the Belfast to win a world title, becoming flyweight champion in 1948.

Bendigo was the first boxer from Nottingham to win the All England title in 1839 and again in 1845.

The 3m bronze statue of Monaghan was erected in Cathedral Gardens Belfast, close to where he grew up.

The statue of Bendigo will (most likely) be erected in Trinity Square Nottingham, close to his birthplace.

Monaghan’s family attended the ceremony, and were joined by well-known boxers, Belfast councillors and crowds of boxing fans.

The ceremony in Nottingham will welcome the many people who have helped us and who have a connection with Bendigo’s story.

The website for Irish Boxing reported that ‘the unveiling of the Rinty Monaghan statue in Belfast this year was one of the biggest occasions in Belfast Boxing.

We know that when Nottingham’s statue to Bendigo is unveiled, it will be one of the biggest occasions in Nottingham Boxing.

In the BBC article, Rinty Monaghan’s great-nephew Eamon McAuley said that the statue was ‘absolutely beautiful’. He described his great-uncle as a ‘working-class hero. He also said that after a five-year campaign to erect the statue, his family were going to celebrate ‘a wonderful day’.

We expect that our statue to Bendigo will also be a beautiful work of art to honour Nottingham’s ‘working class hero’.