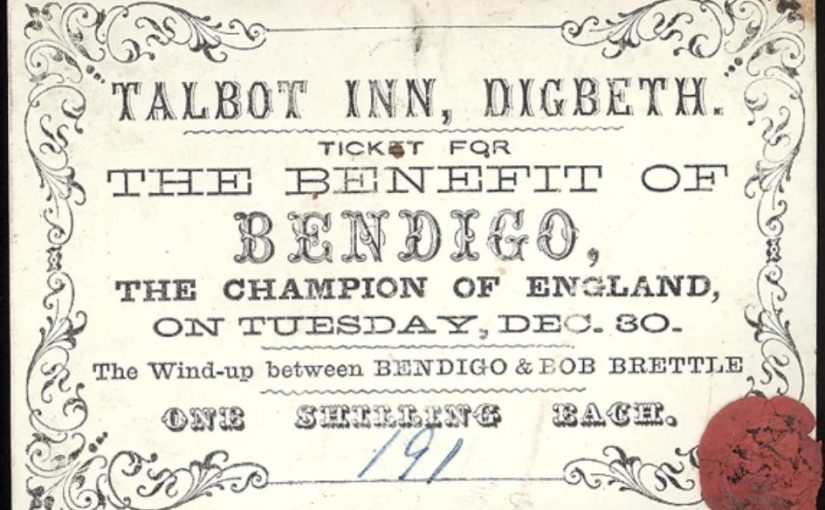 An original ticket to one of Bendigo’s exhibition matches is listed on a US Sports Memorabilia site for $2000.

Jo Sports Inc are currently offering for sale a full, unused ticket for an exhibition match between Bendigo and Bob Brettle on December 30, 1856. It is the earliest boxing ticket currently being offered for sale.

The match took place at the Talbot Inn in Digbeth, Birmingham.

Brettle was an active star in boxing at the time and the match was held to raise money for the retired Bendigo.

Robert “Bob” Brettle, born at Portobello, near Edinburgh, in January 1832. He was a successful bare-knuckle boxer active in Birmingham, England, during the 1850s. He was known as “The Birmingham Pet”.

A silver belt, given to him by his patrons to honour his achievements, and made in Birmingham, was featured on the television programme Antiques Roadshow. It was subsequently donated to the British Boxing Board of Control and is now displayed at their headquarters.

Brettle died aged 38 and is buried in the churchyard of St. Peter’s Church, Harborne in Birmingham.

The ticket is stamped in lower right corner and is not creased or torn. It has the allocated seat number and is described as in outstanding condition given the age. The ticket measures 2 3/8″ x 3 1/2.