Bendigo Memorial Fund is now 18 months old and we are making good progress and lots of friends around the world. Closer to home, Nottingham City Council have approved Trinity Square as the location for Bendigo’s statue.

The Bendigo story centres on this location. Not only was he born here but many significant events in his life happened within a few yards of Trinity Square. Sadly, most of the buildings are gone, several being demolished and redeveloped in the last 60 years.

This makes us more determined to put things right and make the location a permanent reminder to Bendigo.

Trinity Square has always been a popular location for visitors to Nottingham. 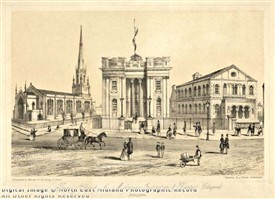 In the 19th century it was home to The Mechanics Hall and the Holy Trinity Church. The Mechanics’ Institution was a national movement for artisans, or mechanics, as they were then called. Many of these artisans were illiterate, and the founder wanted to provide them with a means of improving their knowledge by classes and lectures, by good libraries, music, drama and readings, and by social contacts with a good cross-section of the better-educated section of the community. The original Mechanics Institute stood at the junction of Milton Street, Burton Street and Trinity Square, opposite the Victoria Hotel next to the Railway Station. The Mechanics Institute comprised of a large hall (33m long, 18m wide and 12m high) and a members refreshment room. The hall later became a cinema and was called Mechanics Pictures.

Holy Trinity Church was designed by Henry Isaac Stevens and built in 1841. It was an example of Victorian High Gothic architecture and for many years it had a tall spire which was eventually removed.

In 1953, the council proposed to demolish Holy Trinity Church. The locals were incensed and 16000 people signed a petition against the proposal, however demolition went ahead in 1957.

In 1964 the Mechanics’ Institution decided to redevelop the building on the same site. The stone façade of the 1845 building was exported to the United States of America by an American, who erected as his Californian hunting lodge.

Trinity Square was transformed into a public space again in 2009, with further improvements being made to the seating areas. It now compliments the leisure and retail at The Cornerhouse, which replaced the Nottingham Evening Post offices after they relocated in 1998.

Despite all the recent developments, there are still a few smaller and older buildings, most on the narrow lanes of Trinity Walk and that lead down towards the Old Market Square

Trinity Square remains a well-known part of Nottingham City Centre. All it needs now is a figurehead, and the return of William ‘Bendigo Thompson.